"RISEN!" The Balloon features the Jack Jewell portrait of Christ by the Sea of Galilee after the resurrection, where he met with the disciples, and was seen by more than 500 people.

The Portrait is titled "The Risen Christ by the Sea". It is one of the few caricatures of Christ where he is smiling with glee. It perfectly captures the essence of the Good News, (that he has conquered death, and has forged a pathway for every person to be saved from their sins. It shows him as the loving Lord, triumphant victor, after a gruesome crucifixion and death in payment for our sins.)

The rights to the portrait are owned by The Joyful Noiseletter, who's primary interest is that of a humorous Christian newsletter, with a mission to share the joy of the Good News, through the good-natured comedy of everyday life. Skysail Balloons has secured the exclusive right to use the art on a hot air balloon. 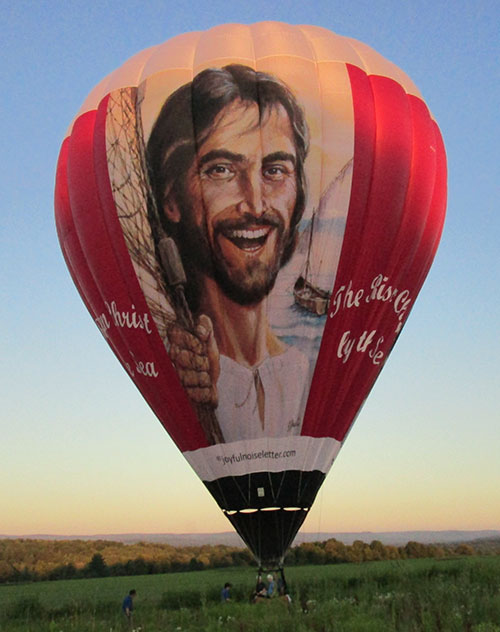 The balloon ride business offers the opportunity to share a totally unique perspective of God's creation. The extension of using a balloon to introduce to, and remind people of, the Good News was a step that made a lot of sense, not to mention the obvious comical irony of having a resurrection themed balloon named "RISEN!"

"The Risen Christ by the Sea" portrait has intrigued Sky Sail Balloons owner and chief pilot Geoff Turner since it was first introduced to him. He has one in his home prominently displayed, and has given a framed print to his children as they have set out on their own. So the thought came to him . . . what better, more warm-hearted friendly way might people be introduced to Christ and the Good News, than with a Hot Air Balloon featuring this iconic artwork.

Since the founding of Sky Sail Balloons Inc. Mr. Turner has felt a calling to have a special interest balloon that would draw special attention, and send a message that does some good in the world. The "Risen Christ" print is a perfect introduction to the core of Christian faith in a way that rebukes the stereotype that Christians are judgmental, dower, serious, curmudgeons, and the opposite of anything fun.

In so many of the other depictions of Christ he is shown as dour or sedate, not at all reflective of Jesus' joy and good cheer, and the Good News of the Gospel. Before his crucifixion, having told his disciples of the path to heaven, Jesus said to them: "I have told you this so that my own joy may be in you and your joy may be complete." (John 15:11)

There have been a few religious themed balloons, but they tend toward the softer ethereal or philosophical aspects of the faith or centered on a single denomination, as opposed to the core of the faith (The death of Jesus, a sinless man, for our sins, followed by his resurrection, which illustrates our potential salvation) This essential truth is foundational to all of Christianity.

The art of Hot Air Balloon manufacturing has progressed over the years to recently allow laser jet photo reproductions of art. Prior to this, the only alternative was to do air brushed reproductions which were impractical and cost prohibitive. A balloon like "RISEN !" has only become an economical alternative in the last 3-5 years.

The Risen Balloon is available to attend balloon events or other Christian outreach events. In order to sponsor the balloon you or your organization must be believers in the sanctity of the Holy Bible, you must profess your faith of either the Apostolic or Nicene creed or outwardly profess belief in the Holy Bible.

Our ministry is broadly supported and looks to lend support to a wide variety of Christian organizations. The event may be secular in nature, but may not be in celebration of that which the Bible demands abstinence from. If there is a gray area, expect that as ambassadors of the Christian faith, we would err on the side of caution, so as to give no offense. 2 Corinthians 6:3 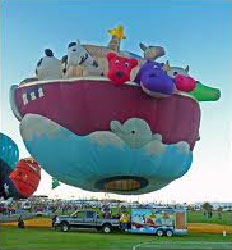 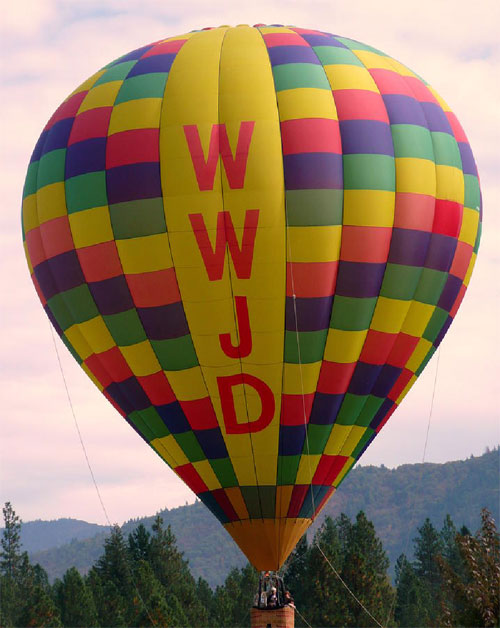 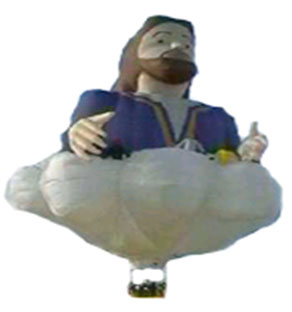 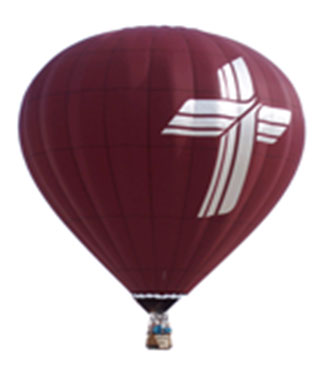 Unlike most other special feature balloons The Risen Balloon is a ride balloon, capable of carrying 3-4 passengers per flight.

Crewing is a job where many hands make light work. It is not unusual to have 10, to as many as 20, volunteer crew helping out over the course of a multi-day event. Please contact us to get a quote and discuss display, crewing, and ride opportunities. They vary greatly by event. All these options are at the discretion of event organizers, but options include: Flights from the event grounds; Balloon glows after sunset; tether rides for as many as 100 people.

We suspect there would be some communities that would not welcome a Christian message of any sort. Actually it is rarely the community, so much as a hypersensitive organizer looking to accommodate a small vocal group, who think the Constitution insures their right to be free from the public display of any religious message. Frequently, if a community speaks up in support of such display, the naysayers shrink back into the shadows and organizers allow a religious sponsored balloon. We encourage you to invite us and allow us to gently encourage the grass roots support that wins the day. If in the end we do not prevail, that would be another opportunity to send a message and give no offense, by giving an interview to the local paper with a good-hearted joke or two. "As long as there is bad weather, there will always be people wanting heavenly intervention at balloon rallies". Please don't let a perceived reluctance to be open to RISEN! stop your organization from inviting us. "And we know that for those who love God all things work together for good, for those who are called according to his purpose." Romans 8:28